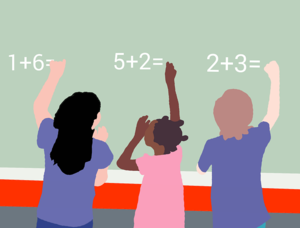 When I started working with Elm programming language I was amazed how simple and yet powerful the type system is. It’s just shocking how far you can go with with just having some symbols and type constructors.

But how really far can we go? Well, I decided to test it out starting with implementing integers and expressions with them. I decided to use Haskell for that. Its laziness may be useful.

I will use the same ideas I used in my Ruby post. First we implement natural numbers and then create integers on top of them.

Following Peano axioms we just establish a zero and every other number will be n+1. This is like a list without data in it.

Now, deriving Show just allows REPL to print values of this type. We need it only to play around with values in the console. We will be adding it to every data type for this sake.

Integers are the same as natural numbers but they also have negatives.

By introducing another data type, of course!

Now we can write complex expressions via prefix notation:

If you go to haskell repl:

True, that equals 2 but how do we get from that to

Time to implement our function eval to evaluate expressions

Now this can unwrap the simplest expression, which is just a number.

Okay, before we continue, I’d like to introduce some functions that will help us playing with expressions:

to_num will convert our own integers into haskell integers. This way instead of long unreadable line

Let’s start with If (no particular reason, I just like it the most):

We don’t have booleans, so we will follow the example of C language and treat zero as false and anything else as true (we could do it the other way around, that’s not important).

In the first line we match our condition with just a value of zero (the sign doesn’t matter so we put wildcard _ on it). If we have zero, we just evaluate the second expression (“else” branch).

The second line says “for any other number evaluate the first (‘then’) branch”.

If the condition is not a simple number, we need to evaluate it first so we put our expression back with condition evaluated.

Here we just flip around the sign. Nothing fancy.

Note the third expression. We follow the same pattern as we did with If - first we simplify the inner expression and then we follow the logic. This pattern will appear a lot so I will not comment on it every time.

Alright, now we are getting to actual arithmetics.

As we have seen with natural numbers, we can do a lot with a simple +1 operation. Let’s implement it:

The first line is concerned with zeroes and is similar to the one in If.

The second line is for the simplest case of positive numbers. We just increment the natural number.

The third line is a bit more interesting. It’s concerned with negative numbers. What happens to a negative number when we add one to it? Its absolute value (natural number) gets decreased by one. We can’t express -1 operation in terms of data but pattern matching allows us to destructure the data. So n = (Next n_minus_one) => (Dec n) = n_minus_one.

The decrement is the opposite of the increment.

Now, imagine you have two boxes of apples. How do we add apples from the second one to the first? We can just manually move them one by one until the second box is empty.

Adding zero changes nothing, so we just proceed with the first “box” (argument). Now we have two cases left: when the second number is positive and negative.

For positive numbers we just increment the first expression and decrement the second, exactly like with apples. For negative numbers it’s the other way around.

Substraction is just like adding negative second argument to the first:

We defined some operations in terms of already existing ones. Noice!

In our “language” it’s quite easy to define comparison operators, because we have numbers instead of booleans.

If we substruct x from x the result will be zero. We can use that:

If expression! So beautiful! We could also use let to name the branches false and true respectively.

Before we move on to > and < operators I’d like to introduce this predicate. It will be helpful to us because other comparison operators will use the same substraction idea.

If we substruct b from a the sign of the result will tell us how they compare to each other. If a is greater, a positive number will be returned, otherwise, negative.

We could also implement logical operators And, Or and Xor. But they are quite straightforward so I can’t be bothered.

Well, this is only the tip of an iceberg. We implemented integers by using only data types and pattern matching.

By the way, have you noticed how similar the code looks to Lisp? The only difference is it lacks outer pair of parens.

could be written in Emacs Lisp:

That was fun. Lots more to try though. I am planning to push this idea even further but maybe some other time.